Here are the highlights from the 4th Annual ‘China Districts’ Report By Real Estate Foresight:

— Jintang County in Chengdu, Xinzhou County in Wuhan, and Huangpu District in Guangzhou are the top picks
— Analysis based on price and volume performance metrics across 170 districts in 20 major cities in China
— In hindsight: predictions made a year ago have proven to be highly accurate
— The broader pattern shows slowdown in price growth but less negative volume growth

Our fourth annual analysis exploring the relative performance of the housing markets in China at a district level covers over 170 districts in 20 major cities, focused on January-July 2018 price and volume growth metrics for new home sales markets. The underlying raw data comes from SouFun-CREIS database, from REF’s data partner China Index Academy in Beijing. The price growth is measured as changes in the simple year-to-date average price, hence the growth figures may be influenced by changes in the product type sold (e.g. high-end vs lower-end, villas vs high-rise).

Jintang County in Chengdu, Xinzhou County in Wuhan, and Huangpu in Guangzhou are among the top picks for ‘relative upside potential’ for the next 1-2 years, based on the metrics and cross-referenced with additional data and qualitative checks from the local sources.

For example, there is a compelling story for Jintang in Chengdu. The county is a focus area in Chengdu government 2017 plan to develop to the East of the core city. Local news media indicate a lot of development ‘action’. The new railway will connect the County to the core city (20 mins). In recent land deals, Poly, Shimao and Jinmao acquired land in July 2018. There is a broader theme of the 2017-2018 rise by Chengdu counties (Xinjin, Qingbaijiang). In terms of data – Jintang shows strong balanced performance on 6 key price and volume metrics, though HPRs imposed in Jintang since mid-May 2018. While we have not done the bottom-up on-the-ground work in these top-pick districts, the data and some qualitative research certainly indicate these locations have a strong upside potential.

The last year’s report, based on the January-July 2017 data, contained a number of predictions for districts that were forecast to see a sustained momentum, future upside, and expected downside. These have proven to be highly accurate over the past year and showcase the power of the data-driven analysis. 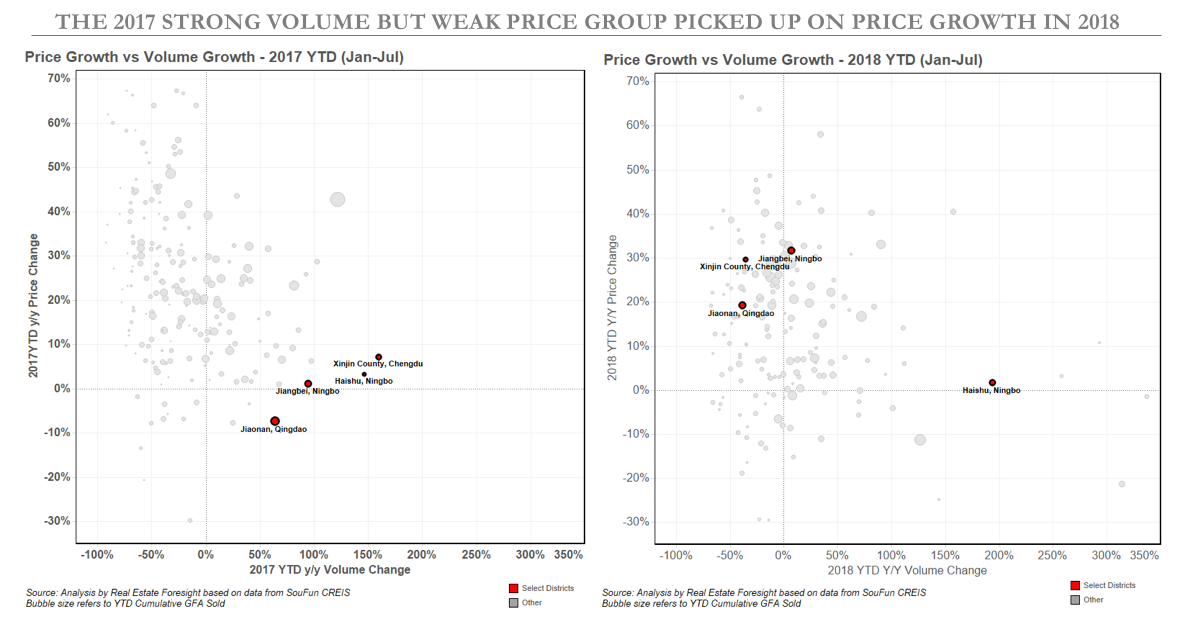 The slowdown has shown clearly in 2018 in all five districts highlighted last year for the top price growth performance but at substantial sales volume declines: 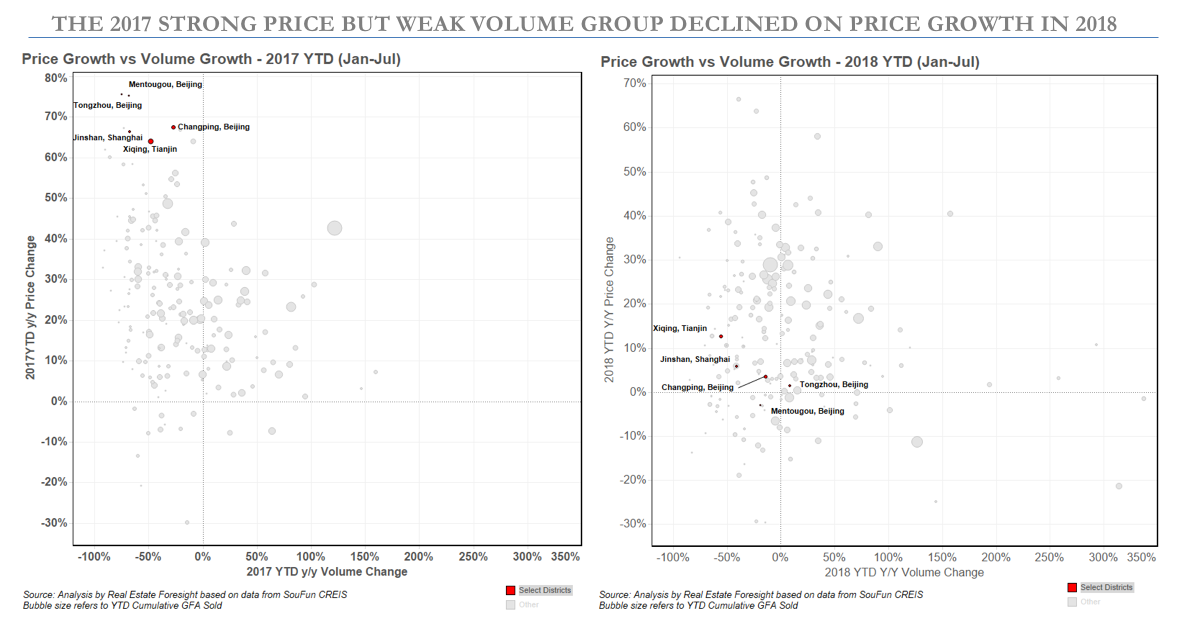 All five districts picked in 2017 for ‘sustained momentum’ have maintained a strong price growth rate in 2018: 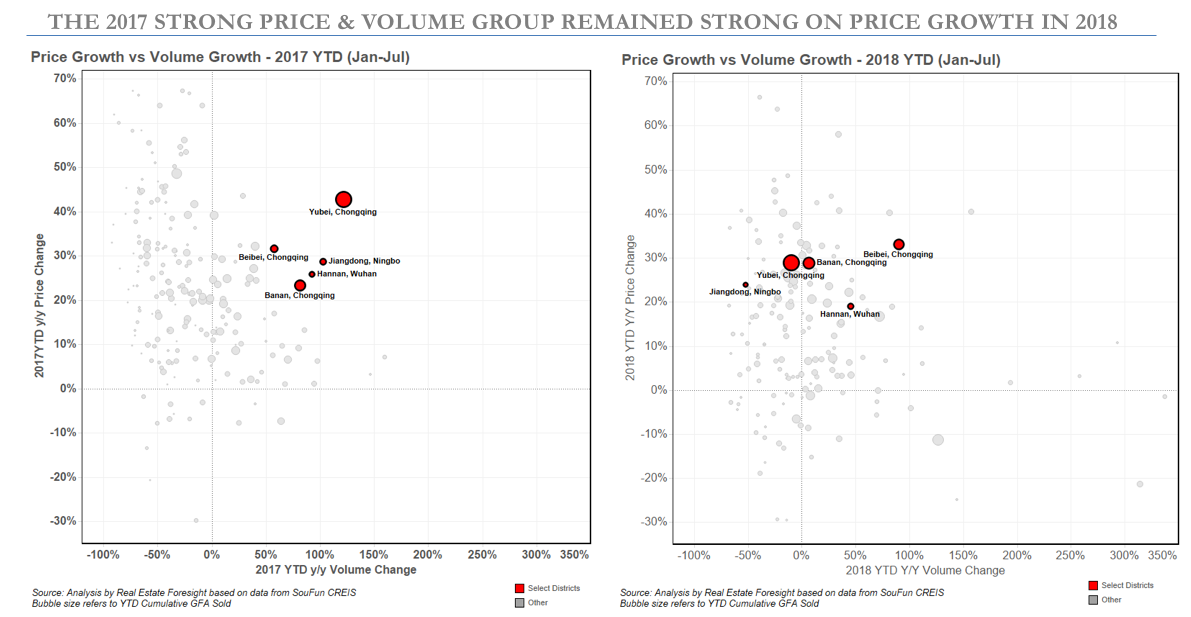 The individual data points may be sketchy, yet the power of the volume of data is that some aggregate patterns can be amazingly predictive as our analysis is showing again this year.

There is no district that would be a top performer on both price growth AND volume growth over all other districts, the same case as in the previous reports.

Compared to a year ago, the median of price growth rates has come down to +13% from +23%, but the median of volume growth turned less negative to -6% from around -33%. The strongest price growth (average year-to-date price compared to the equivalent period for 2017) was in Qingbaijing in Chengdu, close to +70%, although with the volumes declining substantially. The dispersion of performance across districts continued with a similar pattern, much wider over the past three years compared to 2015: 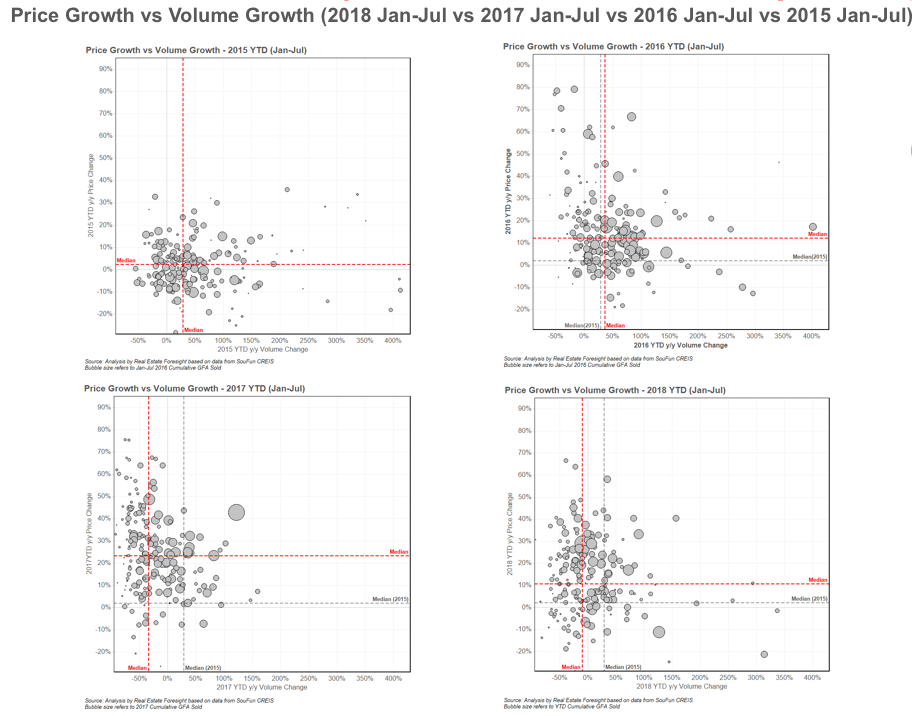 The full report was published to REF clients last week. Please do get in touch if you would like to discuss.

We use cookies to ensure that we give you the best experience on our website. If you continue to use this site we will assume that you are happy with it.OkPrivacy policy